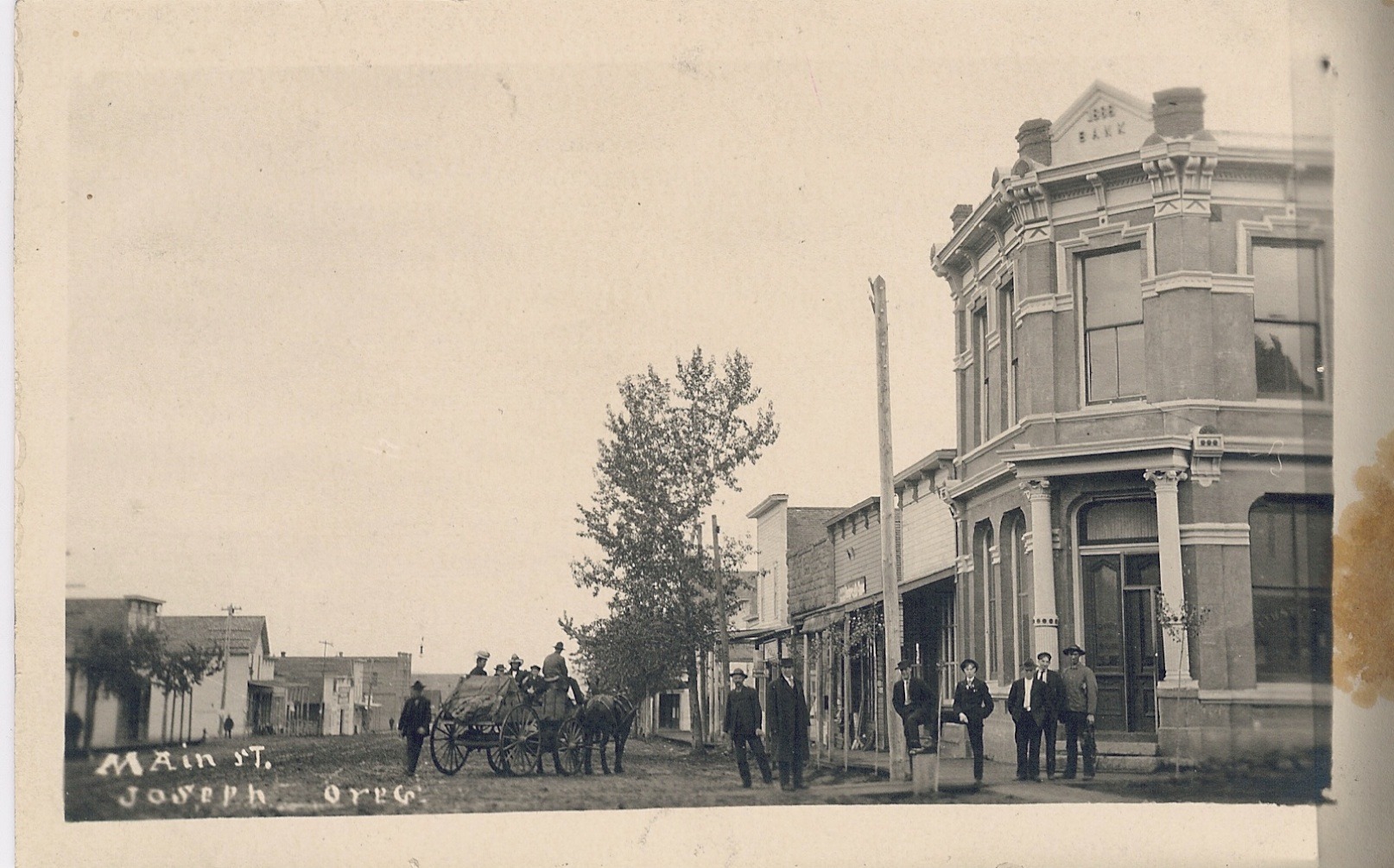 The Wallowa County Museum is located in the historic First Bank of Joseph building built in 1888.

Many items in the collection originated with Wallowa County’s first historian, John Harley Horner. Mr. Horner was an early-day assessor who collected artifacts and information as he toured the county. The remainder of the collection was donated by current and former Wallowa County residents.

The building was entered in the National Register of Historic Places in 1978.

Mission: The museum seeks to preserve and present items of interest from Wallowa County’s human past,representing both the Nez Percé who lived here for so long, the pioneers and settlers who arrived over a century ago, and their descendants.

Open: The Museum is open from the last weekend in May (Memorial Day weekend) through the end of September. The Museum is closed during the winter months, but visits may be arranged in advance by contacting the curator or museum staff at the numbers listed below.

Museum Gift Counter: Books of local historic interest, as well as postcards, are for sale at the Museum, with the proceeds going toward operating costs.

Curator: Jude Graham email: wallowacountymuseum@gmail.com
Email Jude Graham with questions. Research and copying of photographs from our collection is done all year by request. Please contact Jude Graham to make a donation.

Wallowa County was incorporated in 1887, and in 1888 this building was built to house the First Bank of Joseph, the first bank in Wallowa County. The bank occupied the front section of the building for about 25 years. The other ground floor room, which is now the Nez Percé room, was a newspaper office.

F.D. McCully, the bank’s first President, selected the High Victorian Italianate Commercial style of architecture which was typical of cities at the time. The structure of locally made brick was covered by a thin layer of cement. Red tin rosettes adorn the pillars at the front entrance. The door hinges on the big outside doors are ornately carved, the inside doorknobs are also decoratively scored, and all three sections of the building are finished with hand-turned moldings. The large varicolored light fixture in the center of the front room is also typical of the late 1880s. Such fixtures were made by hand with each color of plaster being poured separately and no two are alike. The door of the large walk-in vault was hand painted. The upstairs was originally a meeting hall. Subsequently it was occupied by a private school. The slate blackboard, installed about 1890 across the entire width of the building, is still in place.

In 1913, Dr. Vedro Gregory of Wallowa leased the entire premises for seven years to serve as a private hospital. An office and waiting room were in the front, the kitchen was in the second room, and a new inside stairway was built leading to the ward and the operating room        upstairs.

In 1927, the City of Joseph  acquired the building from the bank and owned it for 50 years. The  Women’s Club of Joseph leased the     upstairs and installed a kitchen and a stage. That hall was than used for all kinds of social occasions; a place to meet, to hold public classes, dances, and banquets.

Because of these activities, a small iron fire escape was added over the front entrance in 1932. Meanwhile, the City of Joseph used the downstairs for the City Hall and library. Later the front room was leased to the American Legion and then to the Forest Service as a ranger station. In 1960, the Joseph Chamber of Commerce opened The Chief Joseph Museum in the front room and operated it during summers until 1972.

in 1973, the city moved its office and the fire station to new locations and the building was given to the Friends of the Museum. On October 16, 1976 the Wallowa County Museum was dedicated and the official opening was May 1, 1977. The old firehall was purchased with proceeds from the first History Book and in 2009 expansion was begun.

John Harland (Harley) Horner, who came to Wallowa County at age 14 in 1884, was the first to take an active interest in the County’s historical background. He joined the Wallowa County Pioneer Association and became its secretary in 1924. In his position as county assessor, he traveled throughout Wallowa County, often by horseback, learning about its geographical details and about the people who had lived in the area.

He began to keep scrapbooks and old newspapers, as well as collecting other items. Some of the things in the museum from his collection: the Indian hemp robe, a piece of wood from an old fort located on Upper Prairie Creek, and an ox yoke.

A copy of Mr. Horner’s typewritten manuscript detailing his conversations and voluminous correspondence with individuals and government officials, the original of which is located in the Oregon Historical Society, is available at the museum for researchers.